Giuseppe is the last in the line of swordfish harpooning tradition in Sicily but, as a biologist, he doesn’t want to violate the nature he would like to protect. He feels both the weight of the lethal harpoon and the responsibility of a millennium-old tradition which risks disappearing for ever.

For over 2000 years in Italy, in the Strait of Messina between Sicily and Calabria, survives the extraordinary way of hunting swordfish with the harpoon, one of the most ancient and spectacular practices in the Mediterranean.

Giuseppe is the son of Nino, one of the best hunters of the Strait. Even if he is old enough to grasp the harpoon, he is unsure whether he has to kill and to seize the legacy of this millennial hunting tradition.

Giuseppe, a nature lover and enthusiast of abyssal fish, is majoring in marine biology at the University of Messina. He would like to be a researcher, to make his contribution so that people can learn to use the sea with greater responsibility.

For a young fisherman of the Strait, killing the swordfish with a harpoon is an initiation rite, but Giuseppe is torn between the meaning of an ancestral tradition and the ethic values of life and nature protection.

Giuseppe is aware that after graduation he will have little chance of working as a biologist and a more realistic perspective is to work for the ferry company of the Strait of Messina. However, it remains the alternative to continuing the long family tradition and become the way of the swordfish hunter. Giuseppe still lacks the courage to go through the final act, to kill.

Giuseppe doesn’t want to hurt the sea with his harpoon, and it is especially when scubadiving that he manages to reflect and resolve his personal doubts, free from conditioning.

Giuseppe does not want to watch the sea only from the surface where everything seems to remain unchanged, he wants to go deep, be fascinated by its beauty, but he also realizes how the sea is drying up and is in danger.

By discussing with his father and some elderly hunters, Giuseppe becomes aware of the great value of the swordfish fishery. He tries to overcome the suffering he feels when he looks at the swordfish dying on the deck of his father’s boat. Their death is hard to bear, probably because it happens in front of him, but it is quick, whereas most other fish caught by hook or by net die after a long agony, yet are not seen until they are caught, their death happening far from our eyes and our conscience.

Today, in a world where profit and environmental exploitation are putting a crisis on the ecosystem, the traditional swordfish hunting, which appears violent because it shows the agony of its prey, is one of the best examples of eco-friendly fishing because the specimens caught are always large and carefully selected. No other fish is harmed or sacrificed.

The dilemma of Giuseppe is the dilemma of our times, between the exploitation of nature and a new environmental consciousness.

Giuseppe will become a true hunter, he will resolve his conflict in favour of a tradition that has always been able to find the right balance between prey and predator. 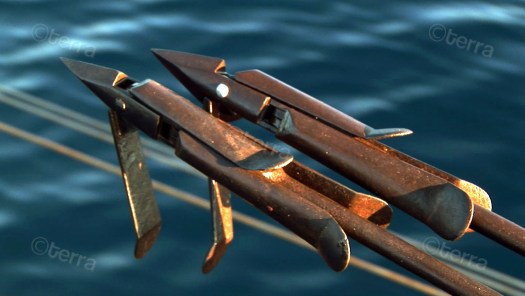